I’ve switched to a different blogging platform! I’m still using the same name but it is a different address. And for those of you who subscribe to my posts, you’ll need to re-subscribe at the new location! I tried to figure out how to just change my whole subscriber list over but apparently I’m not as tech savvy as I thought I was, ha ha.

You can find my current posts here The Unexpected Domestic

if it looks familiar to some of y’all, that’s because it is! It’s my very first blog I had in like, 2012, and I have just decided I want to go back to using that again. I think it’s so fun and surprising that someone wants to read what I post and I love the excitement I get from finding out you’re reading about my life even though it’s pretty boring.

Anyways, thanks for following along on here and I hope to decide to follow me to my new blog!

And the Kitchen is Clean!

Ugh. Well my kitchen is clean. But it’s like eleven o’clock.  Last summer I read  a post about building habits and the author would piggy back a task onto something that would happen no matter what.  For example, she wanted to start the habit of cleaning her kitchen and dishes every night. So she attached that task to her kids going to bed. Every night after her kids would go to sleep, she would go to her kitchen and clean up. Eventually the habit stuck.

Sooo I decided I would do it too! I needed something to get into the habit that I just was awful at doing consistently. So every night after the kids go to bed I drag myself into the kitchen and clean it up. But it still hasn’t become second nature yet.

Wait, let me clarify, almost every night I go to the kitchen. If I skip a night, I always regret it the next morning when the kitchen is messy and I have to prepare the coffee when I wake up. Especially on the hitches when Kevin is gone, having the kitchen in order and ready for the next day makes such a difference.

But tonight, the kitchen is clean and my coffee is prepped! Yay.

ok I have to do the kind of quickly because I just got out of the shower and I’m hiding in my room before Kevin realizes how long I’ve been back here! I didn’t post this on Sunday like I usually try to do so I’m just gonna start with Monday.

Friday: Leftover Spaghetti (even though we will eat at church after the service)

Saturday: Crab Legs at the Beau Rivage! (This is for Adam’s birthday. Just because he moved away doesn’t mean we can’t still go out for his birthday!)

Goodness all of that sounds yummy! I don’t think I’ve mentioned this before but we eat sausage and eggs and biscuits practically every morning and then for lunch usually bagel bites or some kind of lunch meat!

Coming Up This Week.

I have several things that I need to get accomplished this week before Friday! Why Friday? Because on Saturday I have a maker’s market that I’m going to have a booth set up at and I need to spend Friday getting ready for that!

Yesterday I wrote a list of what I need to do and I feel like I’m already making good progress so that’s fun.  I keep thinking of how much more productive I am now that I’ve had kids and it’s just so crazy! I was so lazy before kids. Don’t get me wrong, I’m still lazy. I just don’t have as much free time to spend doing nothing like I used to!

So for this week a few of the things I want to get done:

Making lists of what I need to do around my house is a really helpful way for me to stay on task and actually get things accomplished. I may not get everything completed on my list but having a list keeps me from jumping from random task to random task! Listing out my projects also keeps me from thinking I can do 10 things when in reality I can only do 3.

Friday: Dinner with the Haddoxes

Even though it has been a few months since I last set up a plan, I’m excited to get started again. It is real nice to have this set up and not have another decision to make on a daily basis. For the rest of the month of January I’ve challenged myself to cook all the food I currently have in the house. Surprisingly I had enough in the freezer and fridge for about two weeks worth of meals, breakfast, lunch, and supper! Normally I set my meal plans to go from Sunday to Saturday but I didn’t start until Wednesday this week.

Thursday: Dinner with the Powers

I am super happy to be getting back in the habit of having a meal plan these days, it makes my life just a little bit easier! 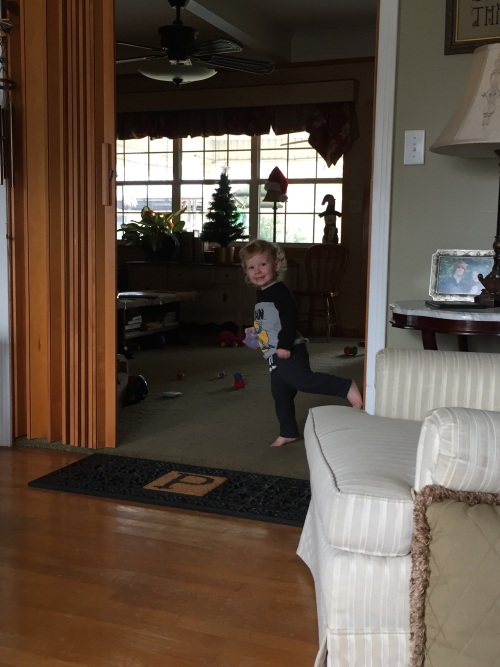 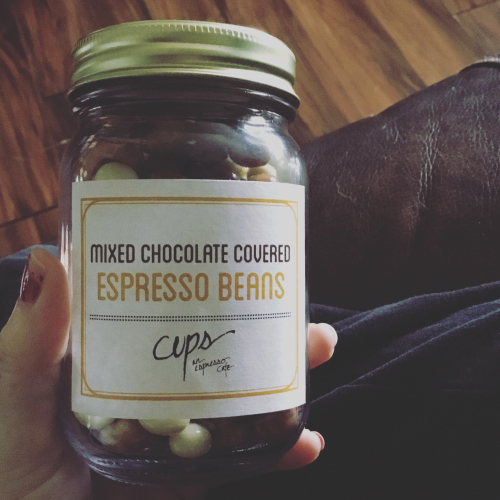 Soo today I had what is hopefully my last eye surgery unless I get another detached retina! We had to be in Jackson at 5:30 this morning and that was rough. But I feel like everything went smoothly and on time. We were back home by lunchtime and pretty much went straight to bed. So far I haven’t had much pain, I’ve been able to just take Tylenol today.

I have an eye patch on my left eye, mainly to keep me from touching my eye while it heals. The doctor should take it off tomorrow and I’m pretty excited to see how my vision has improved. Getting a cataract after having a detached retina happened so gradually that I didn’t notice a loss of vision until it was pretty severe. I can already tell that my eye has healed some what underneath the patch because it keeps trying to open even though I can’t see anything because of the patch.

Kevin is still asleep but I’ve been up and around snacking and eating. We got lunch on the way home but I also got a whole jar of chocolate covered espresso beans. Oh my gosh I just cannot stop eating them! I finally put them up and got some applesauce. My go-to comfort food when I’m feeling sick. So far I’ve had two bowls in the last two hours!

Both of our babies stayed the night at my mom’s last night and they’ve been there all day. I cannot wait to see them! It was Eleanor’s first night to stay away from me and I think she did pretty good! I wasn’t too worried, both of my children have turned out to be great sleepers and I couldn’t be more thankful!

All four of us are going back to Jackson in the morning and I’m hoping for good news!

I wrote this a couple of days ago and I just realized I never published it. Oops! 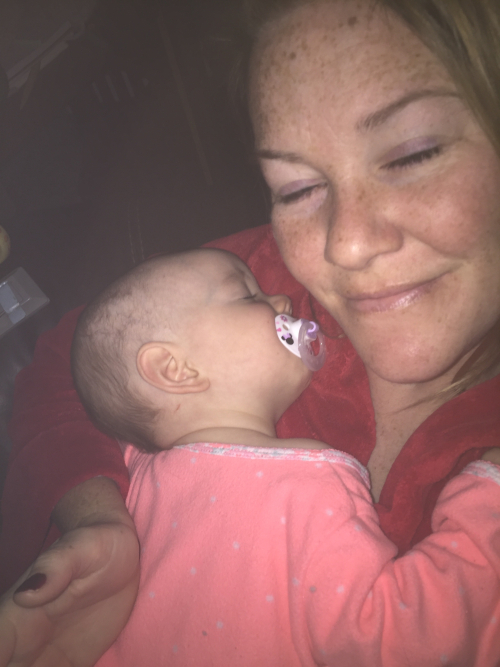 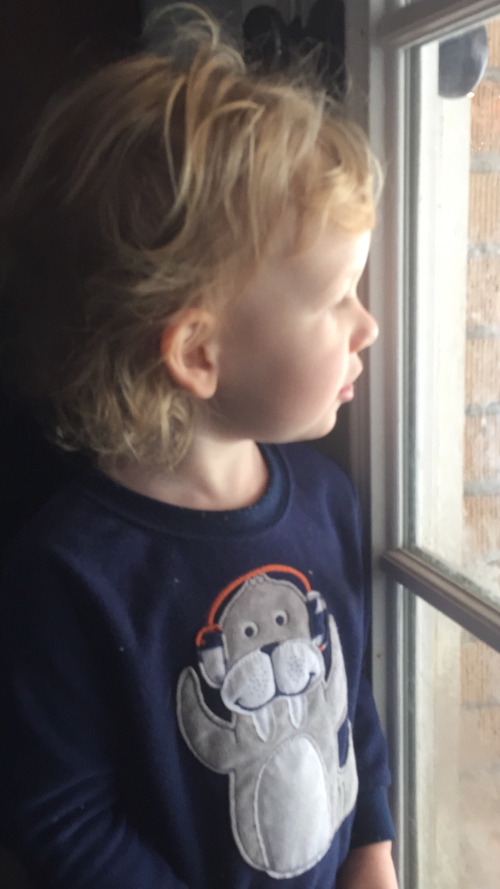 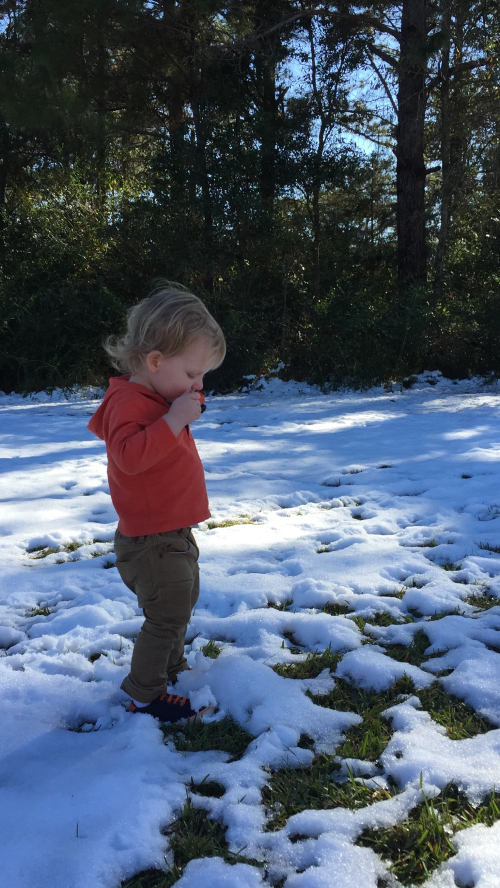 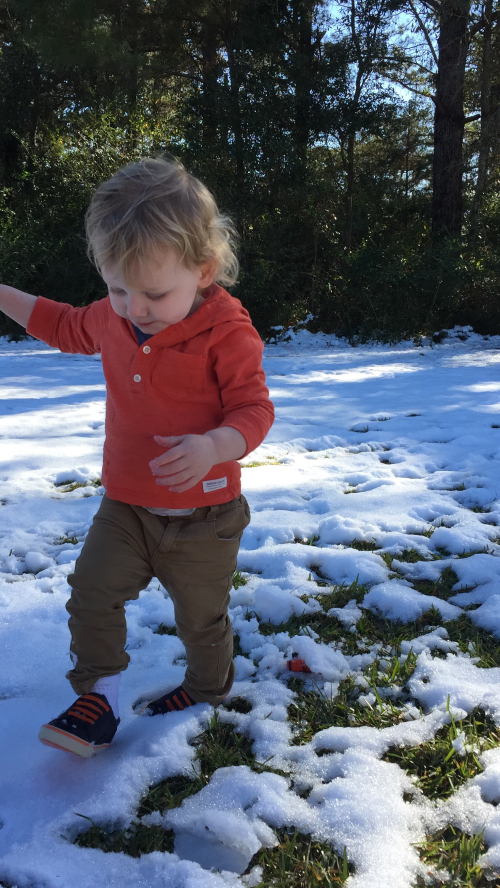 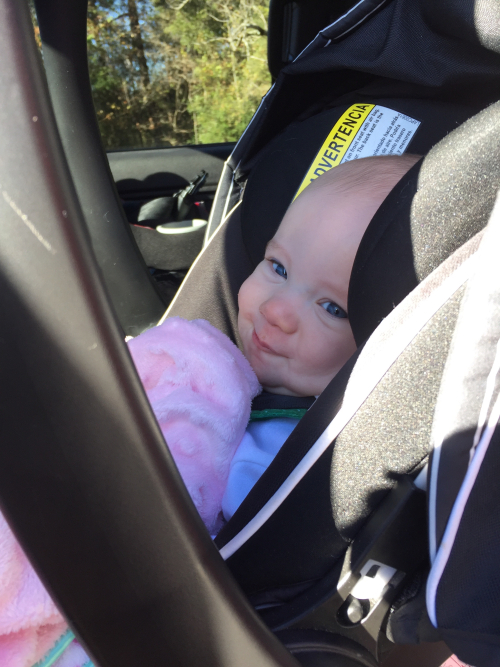 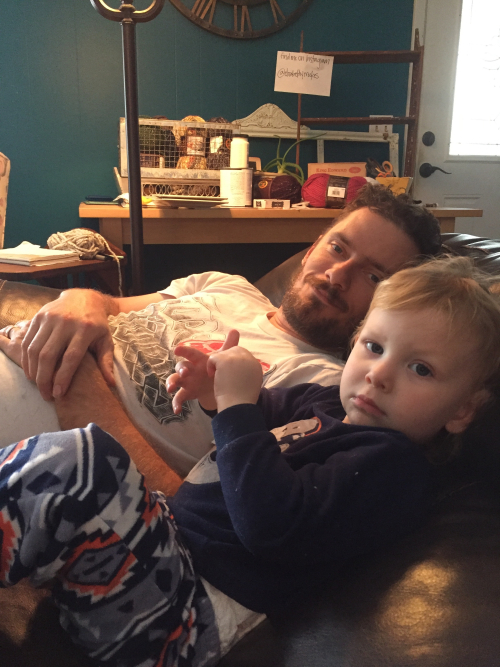 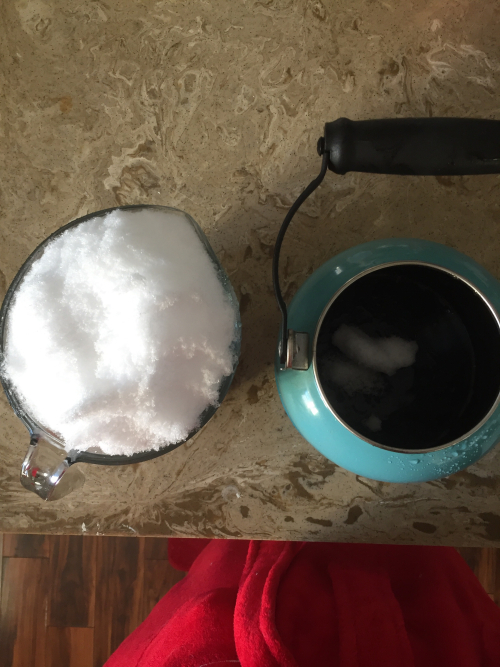 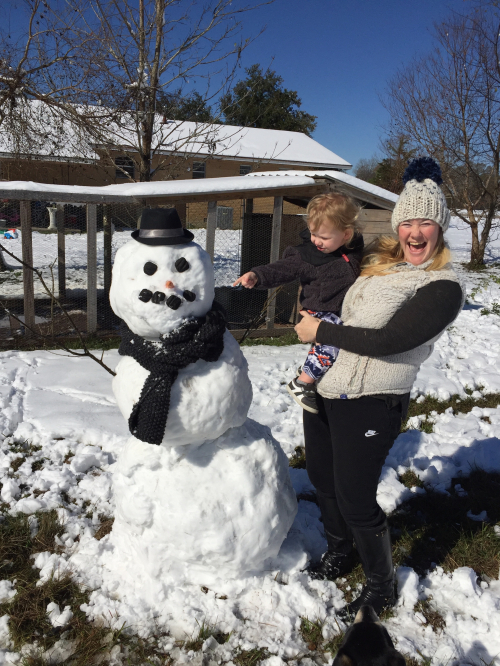 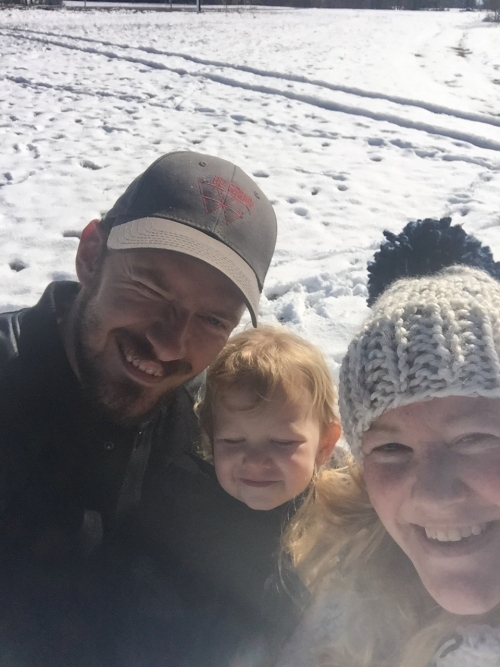 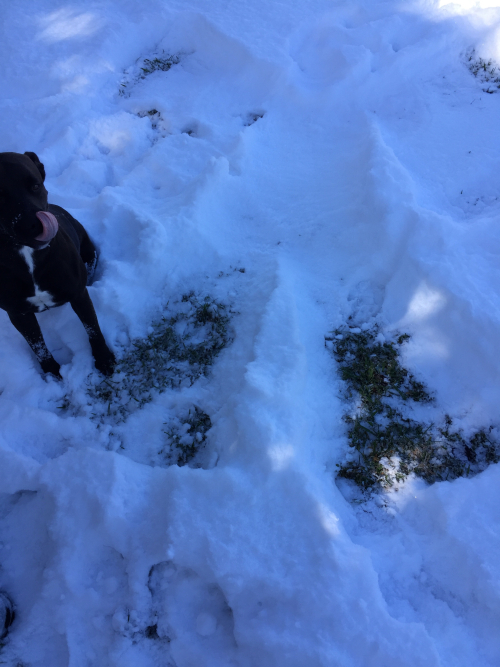 Last Friday it snowed in Mississippi! It snowed a lot, not like how in the past the weather reporters would tell us it was going to snow and then it basically sprinkled down and didn't stick. It looked like there was at least four inches on Kevin's truck.

When I would look out one of our windows, I just could not get over how beautiful the snow looked. Every time it surprised me all over again the beauty of it and how bright and white it looked.

The day started out with Eleanor waking up at four in the morning so we got to spend some quality snuggle time in the early morning. We walked out on the back porch in the dark and looked at the white that was taking over our world. She wasn't too impressed.

I woke Kevin up early so we could go out and look around to take pictures. For the most part, everything was so still! Once Finley woke up, we got him dressed warmly and took him out to experience it. He had fun but I don't think it really made a difference to him that it was snow. Except that it was something he could put in his mouth!

It was so magical to be inside and watch the snow coming down. We watched a Harry Potter movie and also Elf! Aaaand we (I) drank lots of coffee. I'm sure a snow like this won't happen again for another 20 years!

The snow was still on the ground Saturday so I took the opportunity to run out and made a huge snowman! The sun was out so he didn't last very long. Especially since he was leaning to the side a little already. Fin really wanted to touch it but I was trying to keep his hands out of the snow as much as I could. Before I went inside I flopped on the snow to make a snow angel too! I couldn't keep Zoey from running through it but she didn't mess it up that much! 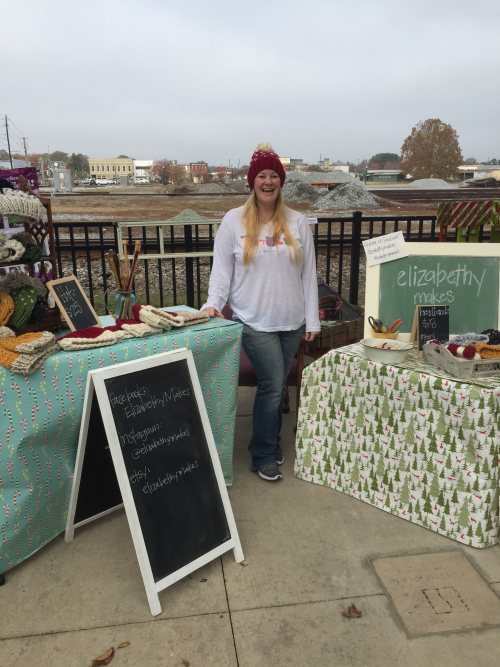 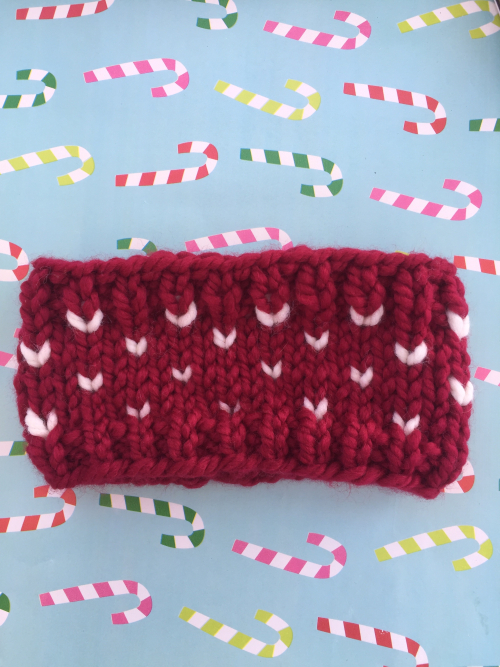 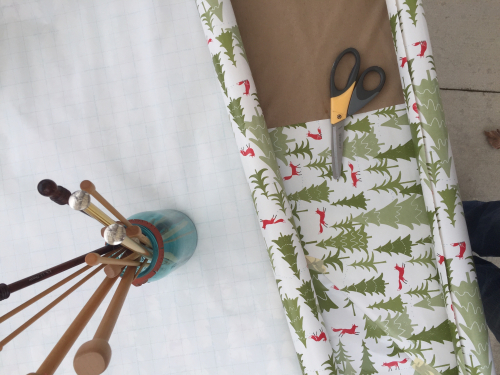 This past weekend I participated in a Christmas market downtown Hattiesburg at the train depot. I had the BEST time. Goodness it was a lot of work but it was so fun to see other people walking around and getting to chat with different folks. Not to mention that we were at the train depot and the trains kept coming by so that was super exciting!

I made hats and headbands with a little bit of fair isle added on. I've been experimenting with a couple of different styles and I really love the look of these hats with a huge pom pom on the top! For the hats I've done earlier in the fall, I was still kind of learning how to make the poms and lately I've been making some giant loose ones and they're just fantastic! I had a small bowl that I kept some extra poms corralled in and most everybody that passed by couldn't help themselves from giving them a little squeeze.

I also love those headbands, the solid colors with the white accents look like little snowflakes. I just can't decide what color I like the best! I wore a red hat most of the day and I've made a charcoal black hat, too, that's super pretty.

Now that the market is over, I'm taking a little break to rest. But now I have some Christmas presents I want to make so I'll be starting on those this week. I expected to be done with crafting for a little while after the market, but I feel the opposite. I'm ready to do even more and I really can't wait to get started.

Hey there strangers! It's naptime here for the Haddox household so I'm sitting outside on my back porch with the doggos having some much needed quiet time. I've been pretty busy these past few weeks(more on that later) so sitting here with the quietness of a chilly afternoon is really nice and enjoyable.

Tomorrow will have been a year since I have posted anything on this blog of mine so I thought I would dive right in with my easiest post, a meal plan! This is what we will be eating this week: