I saw an episode on the cooking channel about pickling so now I want to use this homemade pickling spice to pickle everything!!

Loving looking at the knitting on this instagram feed.

Considering trying my hand at some diy recipe cards.  Would love to have pretty pictures of food to go along with the recipes!

I need to have my very own blanket scarf to pair with a t-shirt!

I've recently discovered this blog and I sooo want to have my very own gathering!

As on offshore wife, I am often home alone.  I don't really care for complete silence in the house so I usually turn the tv on even if I'm not watching it, just to have some background noise.  As a child, my dad always watched home improvement shows that came on early in the morning.  I always thought these were boring because it wasn't like, a  story or anything.  But I also liked them because you learned things from them!  It's the same with the car shows that I watch with Kevin.  Except for Top Gear.  If y'all don't watch BBC's Top Gear, y'all are really missing out!

I like to cook, but I never cared for cooking shows.  I remember that my friend, Katherine-Anne, watched them and so I tried, but eh.  I didn't feel like it was for me.  Probably about several months ago, I had the tv on while I was vacuuming our bedroom and I was scrolling through the channels and I saw that Haylie Duff had a cooking show.  I had always loved Hilary in Lizzie McGuire so I was entrigued and turned it on.

I don't know if it is because I am older and more into growing my own food and having chickens and all that jazz, but I was hooked.  Her food looked so good!  I loved all the ingredients she used and the dishes she put together.  And she is very health-conscious about herself and that makes the ingredients all fresh and amazing.  This led me to looking at other shows on the cooking channel to see what else I could find.  I began recording several shows, including Real Girl's Kitchen and the Pioneer Woman.  For Christmas, I got cookbooks from both of those women and I love them!

This past weekend, I discovered another cooking show that I liked!  So I don't have a huge arsenal of cooking shows that I record and watch allll the time but I'd like to introduce three of my favorites.

Real Girl's Kitchen - This is hosted by Haylie Duff.  I really liked her cooking style and all the healthy ingredients she uses!  Also, the direction of the show and the filming and just the colors and shots are so pretty and light.  It makes me happy to watch it!

The Pioneer Woman - Hosted by Ree Drummond.  Y'all. The food she makes. It just looks amazing!  I always get hungry watching her show and then I get inspired to just get up and go cook wonderful foods. It is so inspiring because she is very clear on her directions and shows a lot of steps of the process.  She also does this with her cookbook, which I got for Christmas.

Kelsey's Kitchen - This is a new show I just discovered this past weekend, but oh my goodness y'all, I just love it!  I've only seen a few episodes, but from what I can tell, she goes to these funky classes like, meat butchering and pickling, then goes home and uses what she's learned to make her own variations.  Now that is just cool, don't you think?

Now I've got to go cook something!  What are some shows y'all like, I wanna know!

so...I have a bad habit of watching tv.  I hate that I watch so much of it.  It is truly a brain rotter.  I could just sit there and just mindlessly watch it for a whole day.  And then I feel horrible afterwards.  I began knitting again in the process of seeking a better way to spend my time. Then I discovered podcasts, which began my love affair, but I can discus that some other time.

Then one evening after Kevin and I had eaten supper, we were just sitting on the couch together in the quiet.  He was looking on his cell phone at cars and trucks, I was knitting.  I had read somewhere that week about a couple who had sort of a date night where they picked out like a playlist and they just kind of hung out together.  So for something that was different from watching tv, which is what we would normally do, I suggested doing something similar.

So he created a Pandora radio station for us to listen to and I kept on with my knitting.  We occasionally talked with each other but not constantly.  It was really nice to just sit and not have the constant mind-numbing noise of the tv going.  Then I got to thinking and somehow came to the realization that Kevin probably does this more than I do.  When I asked him, he told me that, yes, when he is at work he often sits in his room listening to music and looking at the Internet.

After I found that out, I felt kind of silly for thinking of how great an idea I had for us to do that!  But he said he liked that we were doing it so that made me feel better.  I can't wait for him to be home again so we can have another evening together.

I know New Years' was last week but I had taken a break from spending a lot of time on social media during the Christmas holidays.  I hope everyone had a good Christmas and New Year! I know I did :)

This year I did not officially set any new years resolutions, but I do have a couple of goals in mind that I want to do!  In fact on January 1st, I had plans to a) move the furniture around in my pink room, and b) make cinnamon rolls from scratch!  Aaaaand I did both.  I got a Pioneer Woman cookbook for Christmas and there is a recipe for homemade cinnamon rolls in it. Plus I wanted to cook them in my cast iron skillets, which I totally love! haha.  I thought they turned out delicious and everyone else who tried them really liked them as well.  I feel like this could turn into a new obsession, making bread and dough! 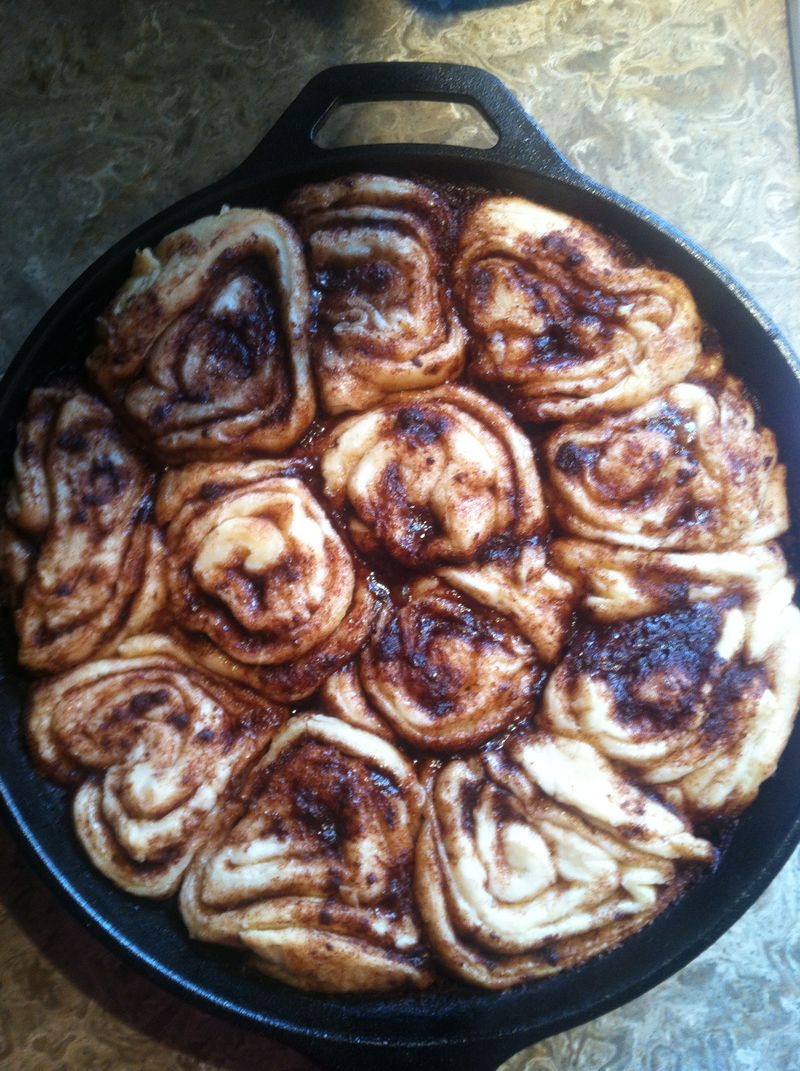 Don't those look delicious?? I think so :)

Even though I did not set an official "New Years' Resolution," I read a lot of blogs where people did have resolutions and they were so inspiring!  Like I said, I didn't set any of my own but really, aren't we all continually setting new goals as a way of our own personal growth?  I know that for myself I try to push myself to be better with my spiritual life and fitness and house keeping and cooking.  Looking back on 2014 I can see where I learned what I like to do and things that I need to work on.

Kevin and I have a lot to look forward to in this year and I am excited to get it started!