How big is the baby: the size of an eggplant, 2 lbs!

Changes: Not any changes this week.

Feeling: The baby kick on the outside.  It's so fun! 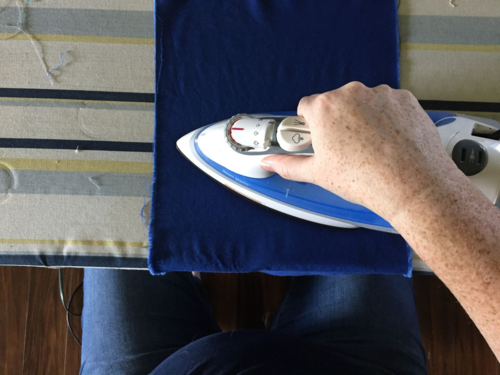 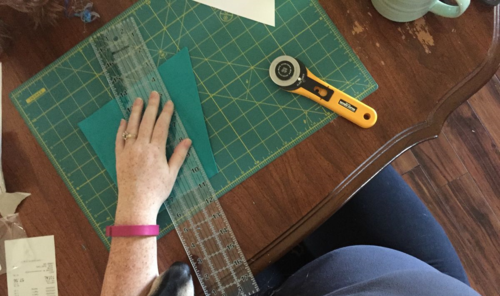 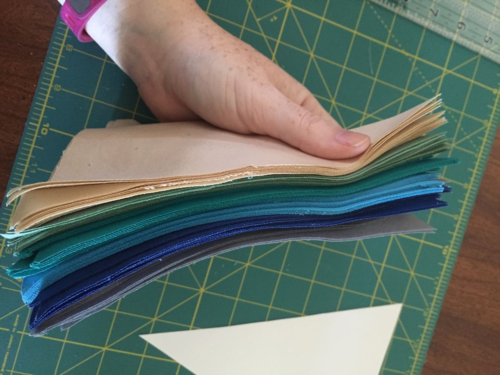 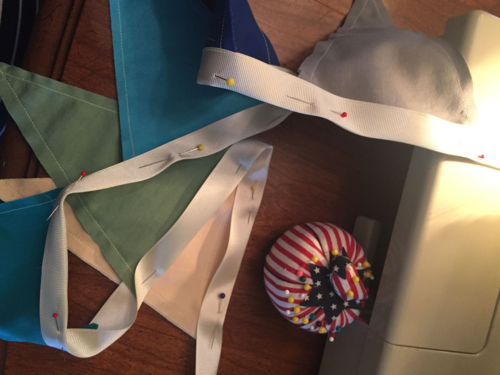 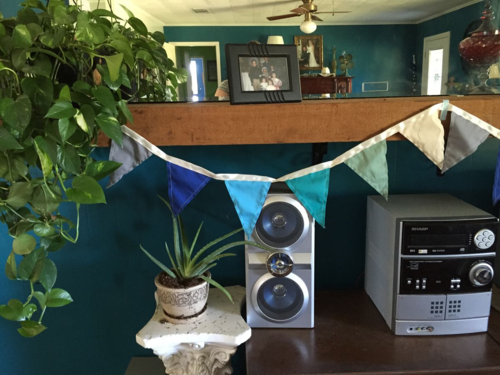 I have always liked the idea of decorating with a fabric bunting but could never quite figure out how I could use it to fit my style.  I kinda feel like it’s one of those things you just have to go for, but I didn’t really have a spot to hang one up so I just never did.  So when I found out I was pregnant, one of my first thoughts for decorating the baby’s room was a fabric bunting.  I didn’t have anything planned out already, but I did know that I wanted one.

At that time, I had not touched my sewing machine in like, four years so I had no idea if I would even have one or make one myself or what.  Like many other things that I come up with, I expected it to be just a design wish that I never followed through with.  But when I started sewing again, I knew that this was a project I would do.  I still didn’t have a clear plan for the colors or fabric or anything until I got to looking around and saw this painting: 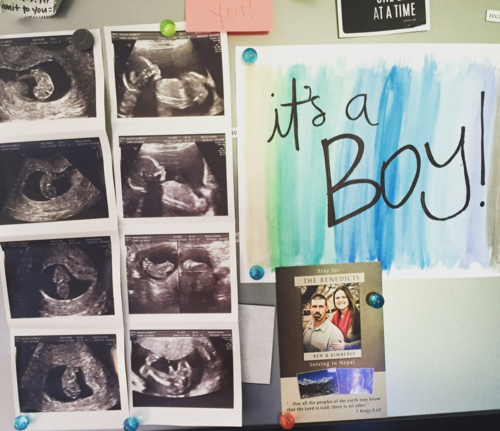 Those colors were perfect!  I had even intended to hang this in the baby’s room and to follow this color scheme.  I don’t plan to have a specific theme for his room, I just want it to be “little boy.”

When my mother and I went to the fabric store, I remember feeling frustrated to begin with because I couldn’t find what I was looking for.  Everything was too floral or girly or just the wrong colors.  Walking into the store, I was against using solids.  I wanted patterns, like stripes or anchors, or something.  After a while and from looking but not finding anything, I began sticking solid colored fabrics into the buggy.  It took like 5 minutes and everything matched perfectly!

I could not wait to get home and begin cutting the fabric, but I knew I needed to wash, dry, and iron it first.  That seemed to take forever when all I wanted to do was attack it with my rotary cutter, but I wanted to start out doing everything the right way.  I knew if I was going to continue doing these sorts of projects, then I needed to have good techniques and habits from the start.  I was really excited to begin cutting with my rotary cutter.  I had read a tutorial with some really good steps and tips on how to cut fabric.  I didn’t know these things when I did quilt no. 2 and cutting those squares was such a nightmare! But I think that was something I needed to go through in order to learn what the best is for me. 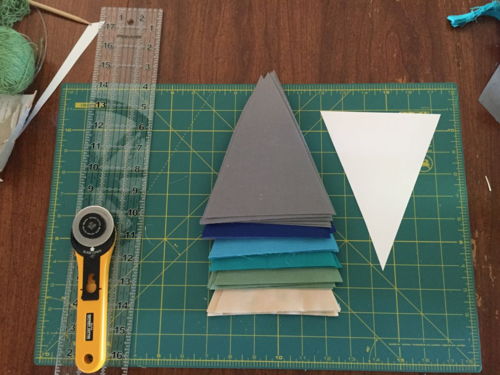 I finally finished ironing the fabric and was ready to start cutting.  At first I was a little timid, unsure of myself but the more I cut, the more confident I grew.  Cutting the fabric is totally one of my favorite parts of sewing!  Once I had everything cut, it was time to sew the triangles together.  I feel like I did pretty well with keeping my lines straight and didn’t even need to pin anything for the triangles.  My intension was to sew the triangles and then flip them inside out to make the seams on the inside.  But then, Kevin remarked how he liked the seam on the outside.  At first I didn’t really want to leave it unfinished like that, but the more I looked at it, the more I liked it that way.  With the fabric being solid, it added another touch to it to make it stand out more.  Plus, not having to flip them all inside out really cut down a lot of work so I was all for it. 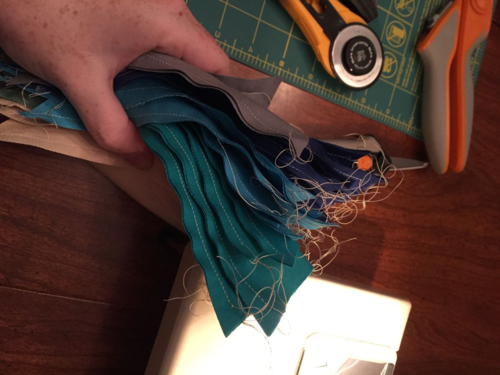 I sat down to sew the triangles to the ribbon that would be what I used to hang them up.  I turned on the iron to heat up in case I needed it, but I was able to just fold the ribbon in half and make a crease using my fingernail.  I was pinning the ribbon and the triangles together so this worked just fine.  In the tutorial I was following, she placed the pins parallel to the way the ribbon ran so that’s what I did too.  I have always just pinned them perpendicular to the way I would be sewing so this was different for me.  I tried pinning both ways and discovered that the way in the tutorial was a lot easier than the way I have been doing it.

I pinned and sewed the triangles until I ran out of ribbon and just decided to finish it there: 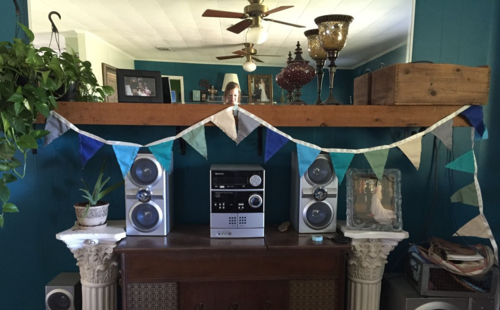 I feel like it turned out great.  I only used half the triangles so I will probably make another one.  I don’t know for sure where I will hang it, maybe on the wall above the baby’s bed.  For right now, I have it just hanging on the mantel. 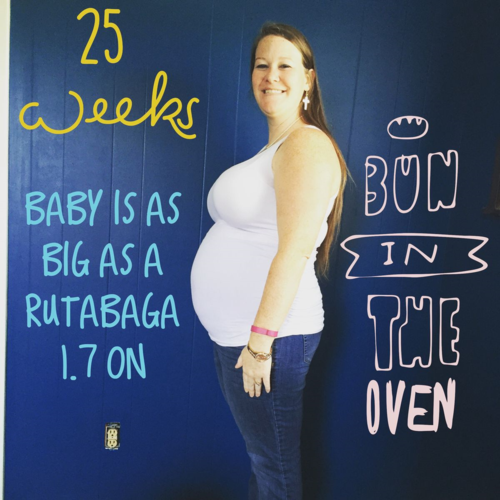 Feeling: I can tell that my core is not as strong as it was.  It's hard to stand up straight for long periods of time. 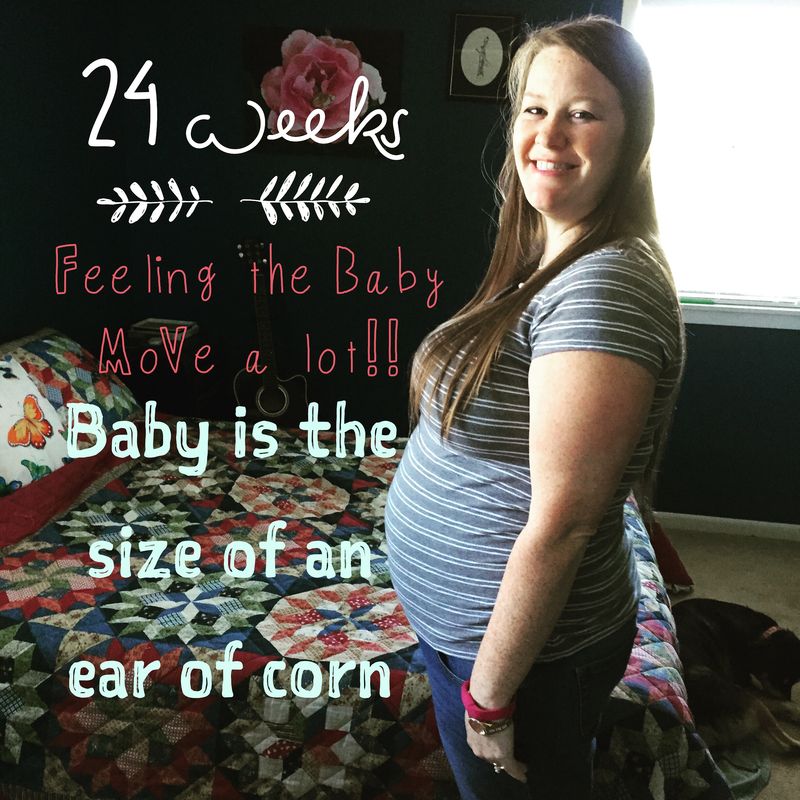 How big is the baby: The size of an ear of corn

Changes: It's getting harder to sit up from laying down, I have to kind of roll and push up!

Feeling: Tired. Just a simple walk wears me out!

Wearing: Maxi skirts and maternity shirts. Also some really lovely makeup I got last weekend and I love it! Changes: Not that much different from last week.  Still feeling those precious baby kicks.

Feeling: Lots of heartburn :(  Ready for some relief!

Wearing: Maternity jeans! I love the ones from Target with the boot cut.  T-shirts from Target that are super comfy!  I hope I can find some more sometime. 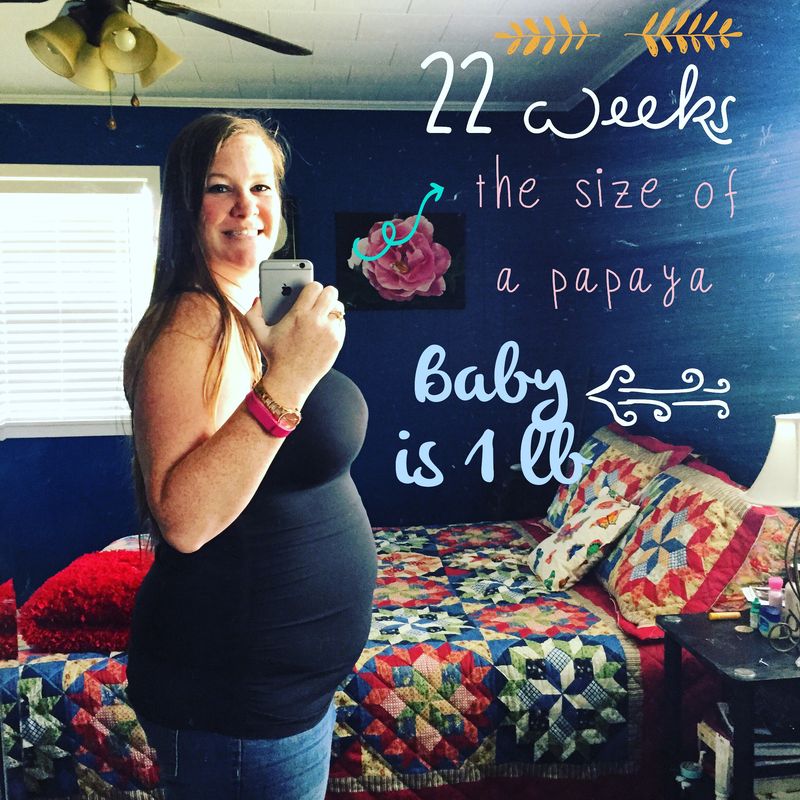 How big is the baby: the size of a papaya, 1 lb

Changes: I can feel the baby kicking! so far it is just on the inside.

Feeling: Tired easily, still.  I thought I would have more energy, but if I do a lot of stuff then it wears me out. I'm really excited because I feel like I finally look pregnant!

Wearing: Maternity jeans! I love the ones from Target with the boot cut.  T-shirts from Target that are super comfy!  I hope I can find some more sometime.